Order
Table of contents and summary
Writing and reviews
Media 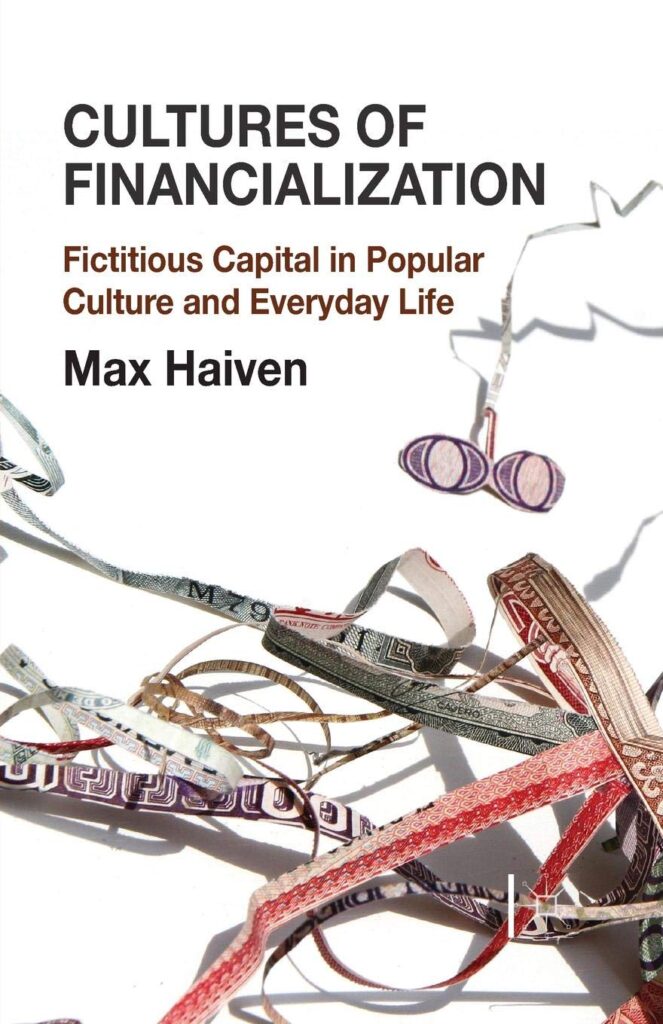 Published by Palgrave Macmillan in 2014

Financialization not only refers to the incredible power of the financial sector over economics and politics. It also refers to the creep of financial ideas, metaphors, narratives and measurements throughout society and culture more broadly.

Examining a wide range of examples and case studies, this book argues that, at the same time as popular culture and everyday life are increasingly saturated by a financial idiom, the financial sector as a whole is more deeply invested than ever in everyday life and culture writ large.

From the security culture of Walmart to children’s play with Pokémon trading cards, from the hype around the “creative economy” to the economics of austerity and precariousness, this book seeks to reveal financialization at work where we might least expect to find it.

In an age when seemingly imaginary financial assets determine the fates of whole economies, this book suggests we take the idea of “fictitious capital” seriously as a way to understand the power of finance, and what might be done to stop it.

I recommend you pirate this book and and all Springer's other publications.

Financialization refers not merely the increasing economic power and influence of the financial sector, but also to the political, social and cultural dimensions of the rise of speculative capital in an age of globalization. Haiven argues that approaches to finance that see it as purely an imaginary realm of speculation do an injustice to the ways that financialization both preys and relies on the everyday dimensions of debt, credit and abstract monetary flows, and the ways these are stitched into the world of meaning, representation, ideology and the imagination. Offering an overview of the book to come, Haiven outlines a case for understanding financialization as driven by social practices and cultural politics.

1. The Reproduction of Fictitious Capital: The Social Fictions and Metaphoric Wealth of Financialization

Haiven takes up Karl Marx’s description of financial wealth as ‘fictitious capital,’ suggesting that finance is a social fiction whose reproduction and power depends on and drives the proliferation of social fictions throughout financialized societies. Haiven draws on research that argues for a more nuanced approach to the ‘cultural’ dimensions of financial speculation, as well as the effects of that speculation on ‘culture’ more broadly. He posits that, while financial assets may not be ‘real’ wealth, they play a central role in the reproduction of capitalism, and that they, in turn, transform the reproduction of social and cultural life. While ‘fictitious capital’ may be an important category, Haiven also offers the concept of ‘metaphoric wealth’ as a means to describe the interconnected and volatile nature of speculative value.

2. Precariousness: Two Spectres of the Financial Liquidation of Social Life

The rise of precarious (part-time, casualized, temporary) labour in the era of globalization (c.1990-present) cannot be separated from the ‘financialization’ of economic, political, social and cultural life. Haiven takes up two contrasting examples.  On the one hand he points to the quintessential Wall Street trader as an iconic of the hollow ideal of success in a volatile world without guarantees, one who enthusiastically and ambitiously courts ‘risk’. This figure is contrasted to the abject ‘sub-prime’ borrower, seen as the victim and/or the cause of the 2008 financial meltdown, a subject not only rendered ‘at-risk’ by financialized neoliberalism, but whose risk itself becomes exploited as a target of speculated. Haiven argues that precariousness may be a common ground for solidarity and possibility beyond financialization.

Walmart is the world’s largest private employer and retailer, but it is also at the cutting edge of merging financial techniques, corporate strategy, global trade and commercial culture into a devastatingly effective economic, social, political and cultural machine. Haiven argues that Walmart is a leader in mobilizing two interconnected forms of ‘securitization’: on the one hand the reimagining of everything from labour relations to marketing to supply chains as a form of ‘risk management’, on the other, the increasing mobilization of surveillance, security, military tactics and a culture of fear. Confronting Walmart’s power, Haiven suggests, requires acknowledging the way the firm addresses its legions of shoppers as astute financialized actors, and also reclaiming and transforming the meaning of ‘security’ itself.

4. Play: Coming of Age in the Speculative Pokéconomy

Traces of financialization—the intertwined economic, political social and cultural resonances of financial capitalism—can be found in children’s play. This demonstrates both the saturation of society with the ethos of speculative accumulation and the dependence of financialization on that saturation.  Examining the case of children’s play with Pokémon cards (a globally popular collectable card game) Haiven argues that children use these artifacts to gain the skills, competencies and forms of subjectivity germane to a financialized society. He posits that Pokémon card play and trading allows children to develop skills in navigating a world of rapidly shifting, relational values, all within and as part of a broader paradigm of capitalist financialization.

5. Creativity: Parables of the Financialized Imagination

The growth in the popularity and salience of the discourse of creativity over the past forty years (and especially the past fifteen) cannot be separated from the rise of financialization and the power of speculative capital. Ideas of ‘creative capitalism’, ‘creative destruction,’ the ‘creative class’, ‘creative cities,’ and the economic potential of creativity are, Haiven argues, germane to an era dominated by financial speculation and the globalization of financial markets. Tracing this intertwined history through a variety of case studies, Haiven suggests that creativity’s euphemistic wooliness is its greatest asset in both explaining and enabling the sorts of neoliberal transformations of institutions and subjects that are part of financialization, from speculative urban property markets to a new breed corporate philanthropy, from the growth of precarious labour to the self-image of financiers.

6. Resistance (and its Discontents): Finance, Regulation, and Cultural Politics

With the financialization of the global economy, and the attendant rise in global volatility, debt, economic precarity and inequality, many have sought to imagine forms of resistance to and regulation of finance capital’s power. In response, Haiven makes three provocative arguments. First, he suggests that finance already relies on resistance, depending on the state and on popular resistance to regulate its otherwise renegade and reckless power. Second, he argues that we might do well to imagine the growth of debt (both that of individuals and of political entities) as a problematic form of resistance to the austere conditions of neoliberalism, an ironic reclamation of wealth. Finally, Haiven offers that resistance is already factored in to the financial sector’s operations, and as such a different vision of agency and change is required.

Conclusions: The Dialectics of Financialized Culture

Haiven argues that finance capital, while a massive and destructive force in economic, social, political and cultural life, also possesses the seeds of its own negation and its replacement. He notes the importance of reclaiming concepts like ‘security’, ‘debt’, ‘creativity’, ‘speculation’ and ‘play’ from financialization. He also argues that, in an age where the global economy is predicated on the reproduction of financialization at the level of culture and everyday life, the work of creating new meanings, relationships, subjects and forms of material and cultural power are more important than ever. Calling for a more militant tenor to the study of financialization, Haiven warns of speculative capital’s capacity to incorporate and digest critique and asks ‘what would a cultural politics look like that took seriously the desires that feed financialization?’