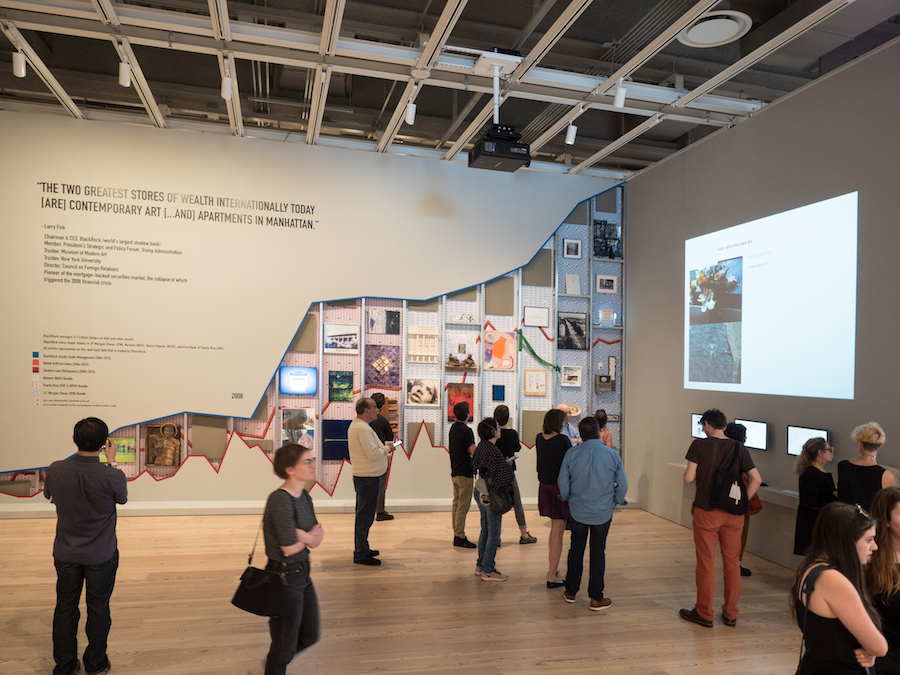 Was the GameStop scandal some kind of massive, participatory activist artwork? In late January and early February tens of thousands of small-time investors seemingly organically organized themselves on Reddit and other online forums to use stock trading apps to get their revenge (and make some money) at the expense of several Wall Street hedge funds.

For those of us who have followed the ways that contemporary art has responded to finance, the digital swashbuckling, mass participation, and symbolic jouissance of the GameStop frenzy felt very familiar, almost as if it had been curated by the New York political social practice platform Creative Time or orchestrated by the Yes Men to reveal just how ludicrous and vindictive the economic system of late capitalism is. In spite of frankly silly pronouncements on the internet that the GameStop frenzy would or could lead to the dethroning of Wall Street, it did, for a moment, reveal a kind of collective power hidden in plain sight. It also revealed the depth and breadth of a lust for vengeance against a financial sector whose investment banks and hedge funds have made out like bandits in the wake of the 2008 financial crisis (that they caused) and have profited from the ongoing pandemic.

There is no evidence that any artist catalyzed the GameStop online peasant’s rebellion that attempted to use the masters’ tools (investment apps) to dismantle his steel, glass, and fiberoptic house. But one might be forgiven for the optical illusion that it was an art project in the era of the “participatory turn.” Indeed, the idea of using the armature of art to sculpt social energies into some kind of impossible rebellion against finance has been appealing to many artists, especially in the past decade.

Perhaps the best known such attempt came from activists allied to Occupy Wall Street who realized that many were in some way artists, and most were deeply in debt. Strike Debt emerged as a platform for creative resistance which first tried to organize a coordinated boycott of repayment of student debt. This is a tactic they soon abandoned but is today being very successfully mobilized by a subsequent group involving many of the same members: the Debt Collective. In 2012 Strike Debt found a way to use Wall Street’s own tools to crowdfund a war chest to buy up heavily discounted sub-prime medical debt for pennies on the dollar and simply forgive it. Strike Debt never presumed their tactic, the Rolling Jubilee, would eliminate all debt. (Ironically, they were helping create a market for such derelict debts, driving up the price.) Their actions, like many participatory art interventions in recent years, aimed to rupture the way society imagines debt, money, and power and offer a taste of the kind of solidarity that, if embraced, might make radical change possible. This inspiring tactic has also led to a recent efforts in the UK under the banner of The Bank Job, which culminated in the performative explosion of an armored bank van.

Strike Debt and similar projects mobilize art to find a new constellation of grassroots political power hidden in plain sight. If neoliberalism and financialization have transformed us all into competitive risk takers, how can we take new, radical risks together for different futures?

Such questions were the impetus for another Occupy Wall Street offshoot, Occupy Museums, who began to curate shows of art about debt based not on style or theme but on to whom the artist owed their medical, personal and student debts. For their station at the 2017 Whitney Biennial, Occupy Museums used digital screens to display works submitted by artists across America and Puerto Rico and took the opportunity to chastise museum board member and multi-billionaire Black Rock CEO Larry Fink for his profiteering from the debt economy. But their effort was not simply aimed at drawing the visitor’s attention to the scourge of debt and its impacts on artists (and everyone else). Their database of artists, arranged by common creditor, was intended to become a platform for debt refusal and rebellion for people who have never met and would never otherwise meet but who were bound together by a shared framework of oppression. It is in this invisible mass, what in another context Gregory Sholette calls the “dark matter” of the art world, that some new, yet unforeseen power resides, a power that briefly flashed in problematic ways in the GameStop frenzy.

Why has it become art’s job to challenge finance in these ways? We have been led to imagine that art stands nobly above the vain, venal, and material concerns of the world and has a privileged moral vantage on the crass world of money. But that is far from the truth. In fact, “art” as a category of human activity distinct from craft and ritual only came into existence in the shadow of and because of the market created by capitalists from the Italian Renaissance onward. From the age of imperial looting to today’s equally violent global capitalist network, art has always been shaped by finance — one need only look to the boards of major contemporary art institutions to see the links. But, ironically, it is this intimacy that gives art its critical edge to upset and challenge finance and, importantly, to help us discover the otherwise hidden sources of collective potential in a financialized world.

As the gap between rich and poor has widened since the 1970s and the neoliberal revolution, and as public services have been cut back to pay for tax breaks for the rich and corporations, poor, working and (supposedly) middle-class individuals and families have increasingly had to borrow to make ends meet. One element of this matrix of financial oppression is the credit rating industry whose opaque algorithms have massive impacts of individuals’ ability to secure employment, education and housing.

In response to the way debt, foreclosure and poor credit had punished her own working-class family on the outskirts of Chicago, artist Cassie Thornton used a small arts grant to found Give me Cred! Extremely Alternative Credit Reporting , a kind of tongue-in-cheek but nonetheless effective anti-capitalist startup. The artist developed template forms and advertised on Craigslist to do long interviews with debtors about their financial and personal story of poor credit, which would then become material for an alternative document Thornton would pen that participants could ostensibly use instead of their besmirched official credit report. Thornton reports that many of the participants found success with their alternative reports, not because landlords or employers paid much heed to the weird artwork but because the process of telling their stories and having the artist reflect those stories back was deeply validating and affirming, giving them renewed confidence and a sense they weren’t simply hopeless losers. Thornton had hoped that those who received these alternative credit reports would, in their turn, interview and create reports for others, but it was not to be. However, her latest project, The Hologram, which is a lightweight, viral framework for peer-to-peer health support, has thrived in this way in the pandemic, and in a moment when medical debt continues to be a leading cause of personal bankruptcy in the United States. (Full disclosure: the author and Thornton are partners, having met during the research for the book that informs this article.)

Other examples abound of art that intervenes in and seeks to mobilize the world that finance and financialization have made. In Loophole for All Paolo Cirio got access to a list of corporations registered in the notorious tax haven of the Cayman Islands and fabricated new incorporation certificates which he sold for pennies online, theoretically allowing anyone to establish an offshore bank account, “democratizing” a tool of finance usually jealously hoarded by the super wealthy. Like the Rolling Jubilee, this form of art-activism may indeed be useful for a few but is more importantly revelatory for many: It displays just how profoundly undemocratic the economy really is, in spite of neoliberalism’s false claims to once and for all wed economic freedom to political freedom.

All of these projects represent efforts by artists working amidst and as part of the participatory turn to find, assemble, and organize a new form of power that appears, tantalizingly, to have accidentally been placed in our hands by the needs of financialized capitalism — the power to wield increasingly digital forms of money not out of individual desperation but with collective political intent. None have succeeded in their wildest ambition, but they have kept alive hope that this potential might be realized, which, perhaps, is art’s job in a disenchanted world where we have been taught to settle for little more than a slow motion economic and ecological apocalypse. In the GameStop frenzy, the power of collective action within, against, and maybe beyond financialization sparked for a moment on the public stage and the financialized world looked, for a moment, a little different: Some shadows deepened; others evaporated.

In terms of its impacts on capitalism and finance, the GameStop frenzy is practically meaningless, no threat whatsoever to the power of Wall Street. But when contextualized in a longer history of attempts to seize the moment to mobilize collective power otherwise, perhaps it points to a different potential that artists and others might yet seize.