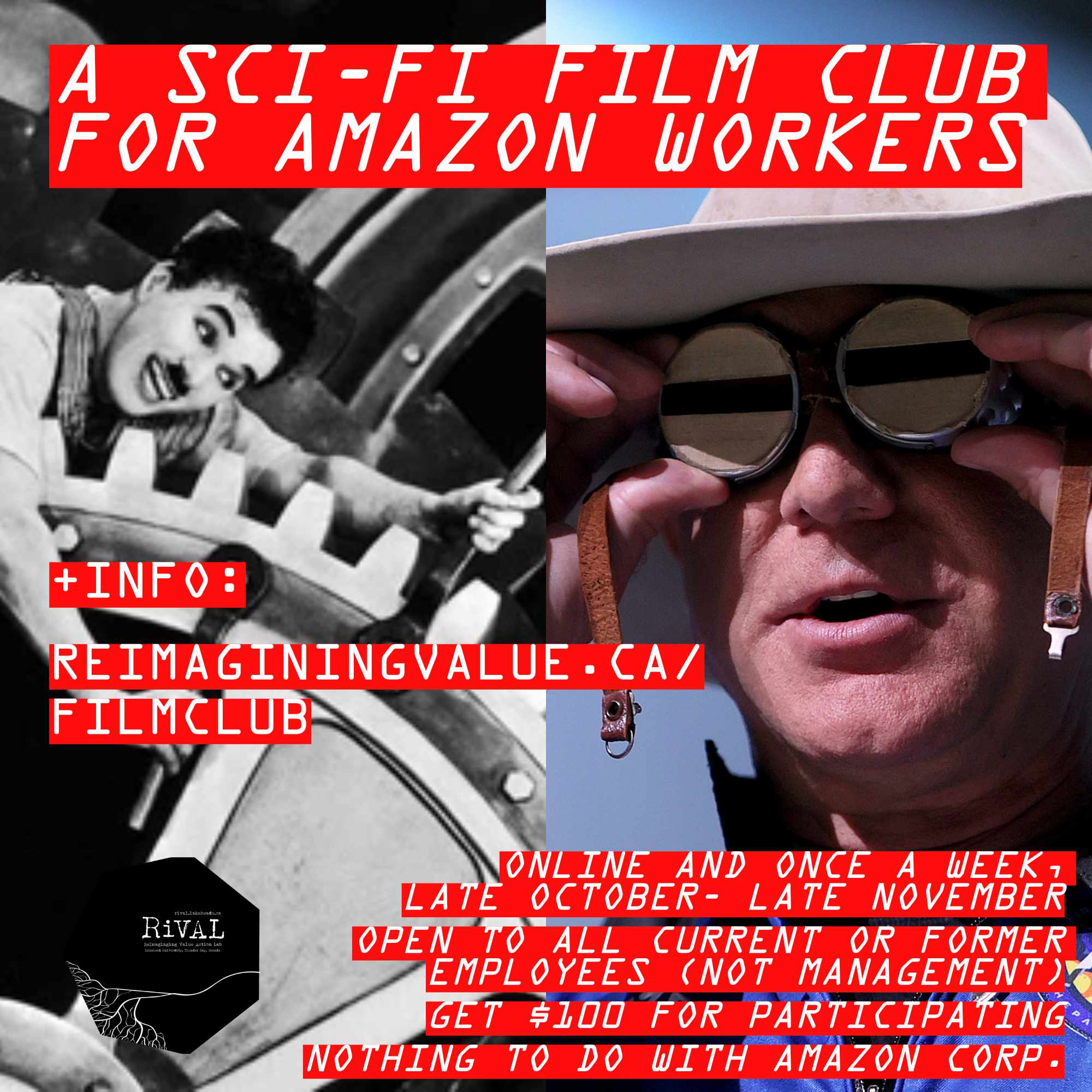 I am very pleased to be working with Graeme Webb and Xenia Benivolski on a new project that is piloting a methodology for using science fiction fiction and film as an invitation for Amazon workers to come together to discuss how its transforming their lives and the future. The project draws on approaches to critical pedagogy, workers’ inquiry and the radical imaginations and has just started having its first meetings. In continues some of the techniques of “convoking” that Alex Khasnabish and I developed in The Radical Imagination: Social Movement Research in the Age of Austerity (2014).

A short overview of our approach has been published in the online magazine of the Sociological Review in a special section on new methods for understanding society. You can learn more about the pilot project here.

“You guys paid for all this,” proclaimed a smirking Jeff Bezos, bedecked in a blue jumpsuit and cowboy hat, speaking at a news conference upon his successful return from the edge of space aboard New Shepard. The world’s second richest man and founder of Amazon took time to thank “every Amazon employee and every Amazon customer” for helping him ascend to the heavens thanks to his pet project: Blue Origin, a company that aims to make humanity (or at least its richest representatives) a star faring species (Hutzler, 2021).

Bezos has a fortune valued at over $200 billion, and workers, society and the environment have certainly paid a steep price for his trip to the stars. The world’s largest retailer and one of the world’s largest private employers, Amazon is ambitiously reshaping the future of capitalism, aggressively disrupting sectors from books, media and logistics, to healthcare and groceries, and from labour procurement to international – indeed, intergalactic – transit.

But in whose interests? And who pays the price? What do the people on whose exploitation Amazon depends have to say? Do they have alternate visions of the future, from within the belly of the beast?

It is well known that Amazon’s massive profits and apparently frictionless operations depend on new and dystopian forms of labour exploitation. The Worker as Futurist project – which our research team is about to pilot with a small number of Amazon employees – seeks to establish and facilitate online workers’ reading groups and film clubs to discover what future dreaming might come from those who are caught up in the gears of Amazon’s colonisation of tomorrow.

Beyond simply being a research project aimed at gathering data, the Worker as Futurist initiative aims to catalyse collaborative consciousness-raising and the cultivation of the radical imagination, by creating a space where workers – from warehouse workers and delivery drivers to MTurk micro-taskers and Whole Foods clerks – can theorise and extrapolate on their own individual and collective experience. In particular, the project aims to provide a platform for current and former employees to come together to discuss the limits of existing cognitive horizons, and what radical hope and praxis might be found in science fiction texts.

The Amazon Corporation already contains all the elements of a contemporary sci-fi story: the merciless subordination of humanity to machines, frivolous space travel, an evil-villain-type ruler who seems out of touch with reality, and the growing pressures of an unforgiving world increasingly consumed by class struggles. In sci-fi films and literature, a narrative of rebellion and emancipation follows a tipping point. What narratives could the workers themselves propose? Where is the tipping point for them? How could we break out of this dystopia together?

Necessity demands that we find ways to come together to dream of and propose the most daring utopias. In the prophetic words of Darko Suvin, it is “only by mobilising Paradise or Utopia that Hell or Fascism can be defeated” (p. 185). Beset by a myriad of social, environmental, economic and political crises, it has proven more important than ever to invite alternative visions of the future that might catalyse a desire for radical change.

However, as author, scholar and activist bell hooks (1995) argues, advanced capitalism is affecting our ability to see and imagine. Our world, and hence our future, has become something not to be created, but to be owned. If our “destiny is to take root among stars” (Butler, 1993, p. 77), we must learn to see beyond our cognitive horizons.

While it is common to understand utopia as an end goal and the imagination as a personal possession, following critical theorists like Robin Kelley (2002) and Thomas Moylan (1986), we understand that they are both, first and foremost, a social process. Based on the idea that: “the radical imagination is something we do, and something that we do together,” (Khasnabish and Haiven, 2012, p. 411) Worker as Futurist seeks to convoke Amazon workers by engaging with sci-fi texts in the hope that new, alternative visions emerge.

The theoretical and political gambit of this project is that Amazon workers, by virtue of the fact that their bodies and minds have been made into a part of that corporation’s dystopian machinations, might have unique insights into the world Amazon is building. And, by the same token, from their cooperative theorisation and imaginative extrapolations, there might emerge the seeds of another, better vision of a more hopeful future.

In the introduction to The Left Hand of Darkness, renowned sci-fi author Ursula K. Le Guin states: “The artist deals with what cannot be said in words. The artist whose medium is fiction does this in words. The novelist says in words what cannot be said in words” (p. xviii). Sci-fi literature uses metaphorical situations that exercise the imagination and create parallel spaces for critical reflection (Suvin, 1982; Syms, 2013). The genre is best understood as a literature of cognitive estrangement – it makes the unfamiliar, familiar. It is this tension that the Worker as Futurist seeks to put to work as those that take part in the project are empowered to consider the world as it is and the world as it could be.

This form of cognitive estrangement, or making strange, has been especially successful when used among equity-seeking groups including LGBTQ2+ people, indigenous people and Black people (e.g. Harjo, 2019; and the Writers 4 Utopia Collective). This has particularly proven to be the case when individuals are not only invited to read, watch and discuss sci-fi media, but also encouraged to write or otherwise share their own visions and stories, as has been explored in the pathbreaking collection Octavia’s Brood: Science Fiction Stories from Social Justice Movements, edited by Walidah Imarisha and Adrienne Maree Brown (2015).

Could this genre be a platform for critique for those caught up in Amazon’s dark sci-fi world?

There is an ongoing need to develop an adequate critique of the totalising mechanisms of capital. However, we suggest that today – after nearly two years of living in a pandemic and as forest fires ravage our slowly dying world – people know full well the dire straits that we collectively face. While science fiction allows us to critique the world, it also allows us to productively imagine alternatives to the status quo (Webb, 2020). Drawing on the work of Ernst Bloch, an ideological critique is most productive when it is “not merely an unmasking (Entlarvung) but is also uncovering and discovery: revelations of unrealised dreams, lost possibilities, abortive hopes that can be resurrected, enlivened, and realised in our current situation. Bloch’s cultural criticism thus accentuates positive utopian-emancipatory possibilities, the testimony to hope for a better world” (Kellner, 1997, p. 84).

Given this understanding, in addition to undertaking facilitated discussions of sci-fi texts, the Worker as Futurist research team will design a series of weekly creative activities to help catalyse conversation and foster a radical and hopeful imagination. Such activities might include asking participants to write or narrate an alternative ending to a film, to compose a short story about themselves as a character in its world, or design a board game based on their reflections – collectively or individually. The theorist and artist Simon O’Sullivan suggests that the process of fictioning is both a “world-building – and world-breaking – technology” (2014, p. 9). By mobilising science fiction in this way, we look to move past the nihilism of the present moment and to labour together to challenge the status quo and to discover and imagine the world(s) of the future.

At this juncture, the purpose of the Worker as Futurist project’s research is not to gather data, but rather to experiment with a hybrid methodology and create opportunities for Amazon workers to do their own cooperative research and theorising. In placing an emphasis on methodology, we aim to better inform and refine research on the Worker as Futurist for future iterations. After all, in the space between utopia and disaster is the reality that “the alternative to a habitable planet is not only the present creeping death of the mind and values, but sweeping and totally non-metaphoric death” (Suvin, 1998, p. 185). In other words, necessity demands that we reimagine capitalism’s future. And what better place to start then here and with those workers who labour in Amazon’s frightful shadow?

More information about The Worker as Futurist project can be found on their website: Amazon Workers’ Science Fiction Film Club