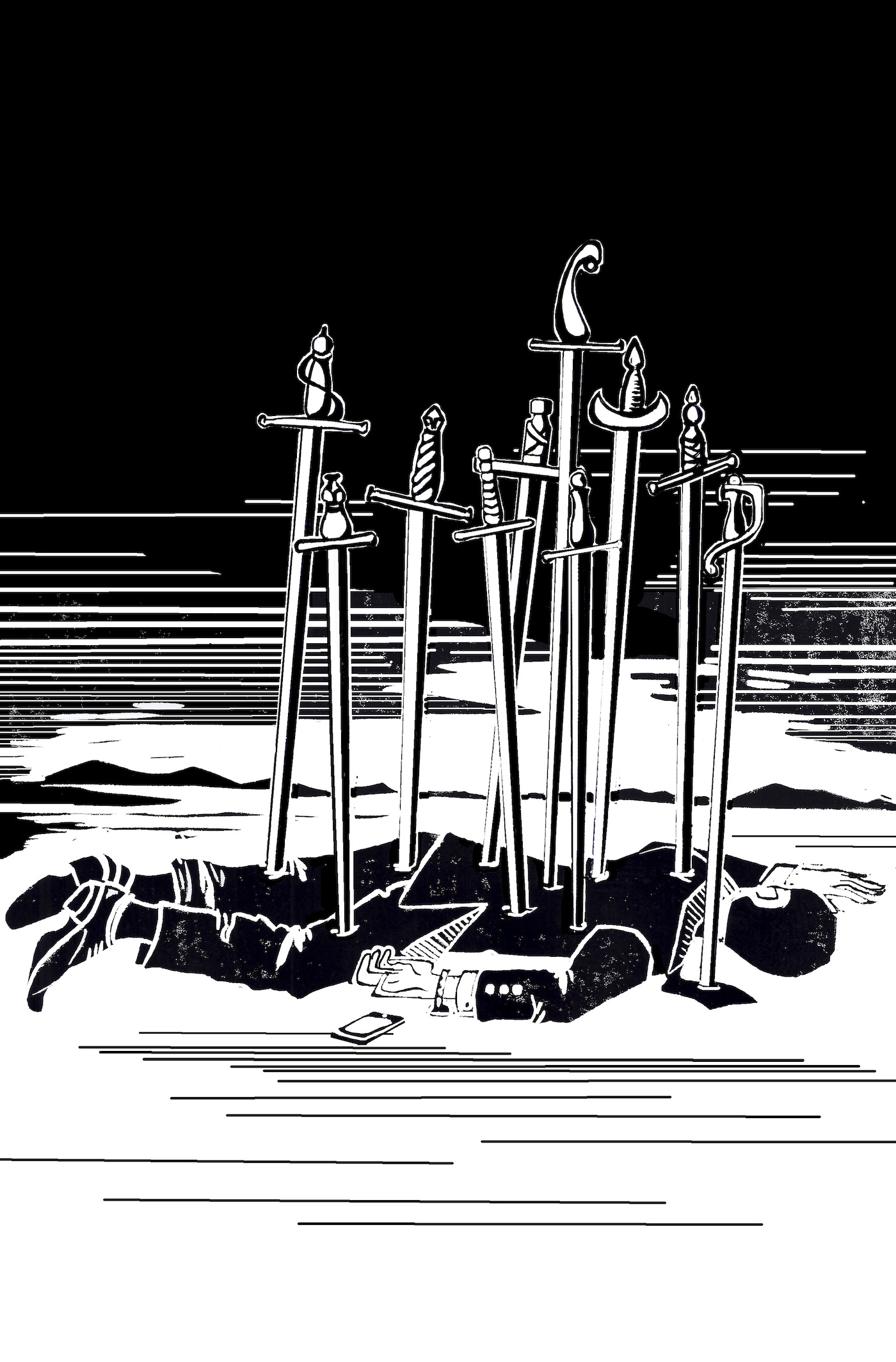 Social Text, the venerable journal of critical theory, has published a dossier of short pieces on revenge in their online annex, Periscope. The pieces either respond to or depart from themes raised in my 2018 book Revenge Capitalism: The Ghosts of Empire, the Demons of Capital, and the Settling of Unpayable Debts.

Below is the text of the introduction, which I wrote.

The contributions to this Social Text Periscope dossier are the outcome of a pandemic year’s worth of online conversations between scholars, artists, and activists on themes related to my 2020 book Revenge Capitalism: The Ghosts of Empire, the Demons of Capital, and the Settling of Unpayable Debts. That book and these contributions seek to understand the broad shape and the specific nuances of the (re)appearance of revenge on the political landscape of the twenty-first century.

But beyond the hand-wringing of liberal pundits and theorists who see the resurgence of right-wing, neofascist, and ethnonationalist parties and movements as aberrations from a noble neoliberal norm, the collected authors locate a politics of revanchism within a neocolonial economic system of global racial capitalism.

As I argue in Revenge Capitalism, it’s not only that this system’s roots are to be found in the horrific vindictive violence that were used to enforce colonialism and slavery. It’s also that the system’s institutions and patterns can, themselves, be understood to be acting vengefully. The US system of mass incarceration, for instance, evidently has nothing to do with public safety or reformation of wrongdoers but, as Ruth Wilson Gilmore shows, is a highly profitable system of retribution. This is a retribution that works to stabilize a capitalism offset by its own contradictions, that works to repress struggles, and that takes its authorless revenge on Black, Latinx, and working class people not simply for specific infractions but, in a sense, preemptively.

The terror of climate change is, likewise, an example of revenge capitalism at work. Even though no corporation or billionaire intends, like some James Bond villain, to wreak ecological vengeance on the world’s poor, nonetheless the outcome (rather than the intent) of global racial capitalism is a kind of needless, unwarranted, and potentially self-sabotaging vengeance. This vengeance will almost certainly lead to the deaths of millions and displacement of billions. Those who suffer will disproportionately be those whose ancestors were colonized or enslaved in earlier moments of this world system. No individual needs to intend this vengeance, yet it occurs. It emerges not from conspiracy but from the contradictions of capital accumulation.

We might, too, recognize capitalism’s vengeance in the remaking of the world into a network of infinite, unpayable debts, a kind of punitive and extractive retribution imposed on individuals and whole polities for the crime of simply desiring to be free. Recent examples include Puerto Rico’s economic situation, wherein debt reprises its long historical role in entrenching colonialism, and the racialized burden of student debt.

The vengeance of capitalism occurs in a moment when a liberal opprobrium towards even speaking of revenge stifles the radical imagination. Throughout the history of global racial capitalism that system’s normalized, routine vengeance against the oppressed has been hidden by the high-minded rhetoric of its beneficiaries. These beneficiaries see rational moderation, Christian forgiveness, and Western institutions of justice, as humanity’s only escape from a universal human prehistory of endless, cyclincal revenge. This vengeful atavistic loop is projected onto “backwards” non-European civilizations as a means to justify those civilization’s  subjugation, a form of preemptive revenge allegedly undertaken for those “backwards” civilizations’ own good. Meanwhile, resistance to colonialism and imperialism, and the rebellions of the European working class, have been framed as pathologically, vengeful, threatening to reopen the Pandora’s Box of revenge.

As such, we not only inherit a world created by global racial capitalism’s vengefulness but also one where that vengeance has been hidden or projected onto the oppressed. We also inherit a dominant discourse of revenge, shaped within and for the perpetuation of that system. As such,  a struggle over the very meaning of revenge is worthy and overdue. In this dossier, radical thinkers revisit revenge as a category for rethinking global racial capitalism and what might be done about it.

It is for this reason that it becomes increasingly important to dwell with and challenge the ways that revenge has been depicted and deployed in art, literature and culture. Doubtless, revenge is one of the truly timeless themes in human narrative. But in each time and place its cutting edge of meaning and moral heft are forged, discursively, by social and economic power relations.

In our moment of “late capitalism,” revenge has proven a highly profitable theme across many genres of popular culture, ranging from sentimental and Manichean tropes of comic books (and blockbuster films based on them) to the campy oeuvre of Quentin Tarntino. Often, revenge is depicted in reactionary ways, for instance in the blockbuster Game of Thrones series where this allegedly timeless human curse was tapped to fuel eight seasons depicting an endless war of all against all. While obviously a fantasy, the pessimistic depiction of “realistic” pre-modern barbarism whets the ideological appetite for bestselling texts like Stephen Pinker’s The Better Angels of our Nature, a book intended to show us that modern, capitalist “democracy” has finally solved revenge’s dark riddle. Other times, tropes of revenge is mobilized in the name of progressive or radical  causes, as for instance in recent feminist reappropriations of the rape-revenge subgenre in films like The Nightingale or Promising Young Woman. The ambiguously presented political vengefulness of Killmonger in Marvel’s Black Panther introduced the specter of the revenge of the oppressed, that specter that has so long haunted the colonial imagination. These themes have been taken up in the independent Brazilian hit Bacurau, or the films of experimental Ojibwe filmmakers Adam Khalil and Zack Khalil. In these latter, more experimetal examples, the very meaning of revenge is reshaped, away from the passion of a pathalogical individual and towards horizons of collective liberation.

In this dossier, many of the authors explore the politics and economics of revenge in reference to popular culture. Eunsong Kim discusses the Oscar-winning Parasite as a parable of class war in a new gilded age. Anna-Esther Younes skewers Quentin Tarantino’s “Jewish wish-fulfillment fantasy” Inglourious Basterds as, in fact, an American fantasy where historical events are conscripted into the service of the very white supremacist narratives that the film claims to fight against. Bedour Alaagra’s meditation on Black and anti-colonial vengeance is prompted by a visit to Johannesburg’s Apartheid Museum and its tourist-friendly imperative towards forgiveness and reconciliation.

Some of these contributions were the result of guest presentations in an online revenge-themed critical film club I organized over the New Year’s holiday as we entered 2021. Other contributions derive from conversations organized to discuss themes in Revenge Capitalism, including one organized by the radical publisher Common Notions in November of 2020 and one organized in February of 2021 by RiVAL: The ReImagining Value Action Lab in cooperation with the Race and Capitalism Project​ at the University of Chicago, the Luskin Institute on Inequality and Democracy​ at the University of California Los Angeles, and the Institute for Advanced Studies​ at University College London.

To dwell with revenge as a category of critical thought is not to advocate for it as a political strategy. As Fanon warns, “‘a legitimate desire for revenge’ cannot sustain a war of liberation.” Rather, I take all the contributions to this dossier to be inviting us to recognize that the age of revenge politics is already upon us, and has been with us for some time, in spite of claims that ours is (or was) a world of the “capitalist peace” at the proverbial “end of history.” These contributions indicate that revenge is not simply an atavistic politics of reaction existing in the borderlands of global racial capitalism’s empire but, rather, they are at work at the system’s center. These texts challenge us to grapple with the idea that the rise of revenge politics today, where reactionary forces seem to promise no brighter future but only more and better vengeance, might be a dialectic expression of an underlying revenge economy. They show how we might best glimpse the broad shape and manifold complexities of this revenge economy through cultural works which rehearse its dreams and its nightmares.

If, today, we are in an era of revenge politics, revenge economics, and revenge culture, what would the revenge of the repressed, the oppressed, the dispossessed, look like and feel like? Are the commodified fantasies of revenge offered by the culture industries accelerating reactionary politics? To what extent are they offering a tranquilizing catharsis for legitimate rage? To what extent are they providing wish-images that might stoke the flames of rebellion? By what measures might some “we” organize itself around the dream of avenging history, and with what consequences?

As I concluded this introduction in the summer of 2021, the territories currently known as Canada were rocked by the “discovery” of mass graves of Indigenous children who had been seized from their communities and forced to attend Church-run “Residential Schools” where abuse and neglect was rampant and where the objective was, in the words of Canada’s 2017 Truth and Reconciliation Commission’s final report, “cultural genocide.” Indigenous communities had long known that bodies were literally buried at or near the schools and the Commission had advised the Canadian government to invest in their discovery as part of its efforts towards “reconciliation.” When this was not pursued and Indigenous communities took it upon themselves to hire forensic teams to investigate.

The aftermath of these “discoveries” has seen the targeting of churches in Canada, especially in Indigenous communities, for arson, presumably as revenge for what these institutions did to the protagonists’ kin, as well, perhaps, as a response to the strong wave of genocide denialism, minimization, and outright racist vitriol from non-Indigenous reactionaries in the colonial settler state. Media narratives about the property destruction has been cautious, but online comments reveal the full scope of the racist assumptions: such vindictive “attacks” against churches are, we are told, only to be expected from “savages” who were rescued from their own beastly, vengeful nature by the Church and the colonial imposition of the “Rule of Law.”

But here, instead, we might follow Unangax̂ theorist Eve Tuck and wonder if revenge might be a theory of change, especially in an age when the ongoing genocidal campaign of settler colonialism continues to be waged under the stifling and silencing blanket of an official discourse of “reconciliation.” As Glen Coulthard notes, those who refuse to be reconciled are conveniently (once again) cast as enemies of civilization. Writing with C. Ree, Tuck asks us to consider how “to  the  (purported) (would-be), hero, revenge is monstrous, heard but not seen, insatiable, blind with desire, the Cyclops robbed of her eye. To the self-designated hero, revenge hails a specter of something best forgotten, a ghost from a criminal past.” Revenge, then “is the work of now  and  future  ghosts  and  monsters” of settler colonialism, “the  supply  of which is ever-growing.” Vengeful haunting, she writes “is the relentless remembering and reminding that will not be appeased by settler society’s assurances of innocence and reconciliation.” It “doesn’t hope to change people’s perceptions, nor does it hope for reconciliation. Haunting lies precisely in its refusal to stop. Alien (to settlers) and generative for (ghosts), this refusal to stop is its own form of resolving.  For ghosts, the haunting is the resolving, it is not what needs to be resolved.”