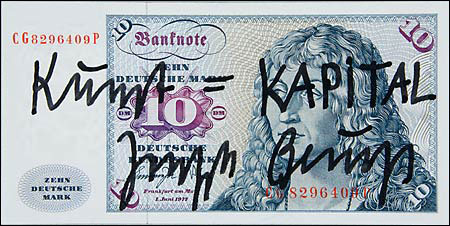 Haiven, Max. 2019. “Art, Money and Financialization: Six Radical Money Artists on Either Side of 1973.” In A Cultural History of Money: The Modern Age (1920-Present), edited by Taylor C. Nelms and David Pederson. London: Bloomsbury.

Money and art share a strange and fateful symmetry. In this chapter, I describe one part of that symmetry, focusing on how this entanglement has evolved through the advance of financialization. I have selected the six works by radical artists from two key moments of crisis in the history of financialization: 1973 and 2008. All six directly engage with money, either as a tangible medium or as a prompt for artistic, political and cultural critique and invention. By critically examining this work, we can see how artists understand the broader economic conditions in which they find themselves, gain an understanding of those conditions, and trace the fate of money itself. Artists like these seize upon the contradiction with which I opened this chapter: under late capitalism money and art appear as sworn enemies but in fact share deep affinities. It is these affinities that give money-art, and especially radical money- art, its aesthetic and its critical heft. Such approaches are especially important today, in our moment of financialization.