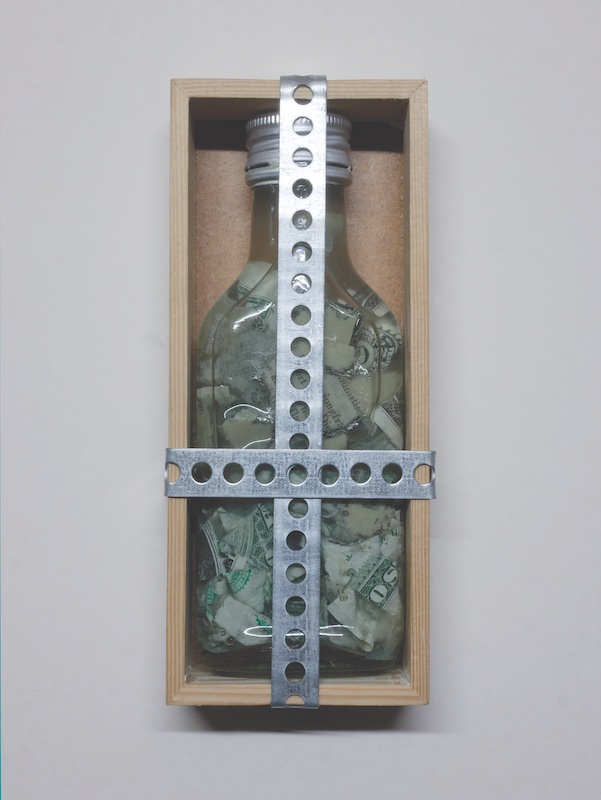 The following essay appears in English and Romanian a special issue (#48/49) of the highly-regarded Romanian journal ARTA,  edited by the artist Dan Mihălțianu, whose excellent work I have written about elsewhere. 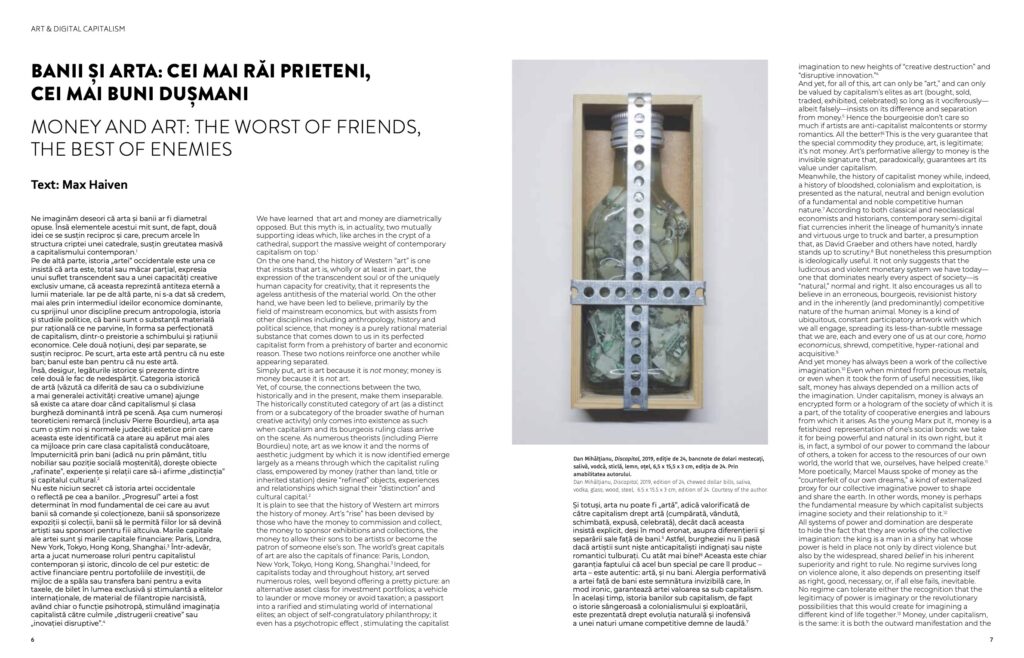 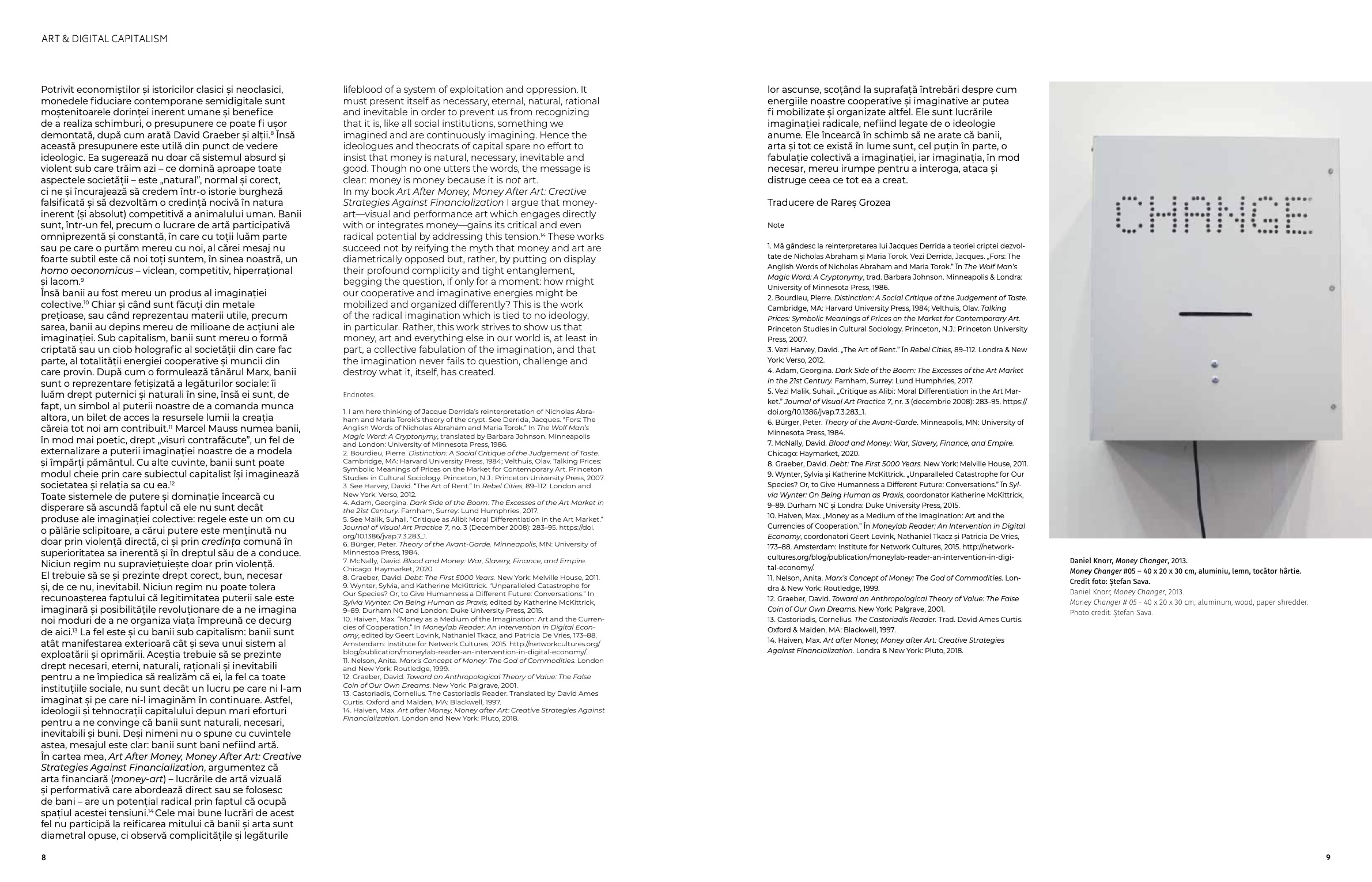 We have learned  that art and money are diametrically opposed. But this myth is, in actuality, two mutually supporting ideas which, like arches in the crypt of a cathedral, support the massive weight of contemporary capitalism on top.[1]

On the one hand, the history of Western “art” is one that insists that art is, wholly or at least in part, the expression of the transcendent soul or of the uniquely human capacity for creativity, that it represents the ageless antithesis of the material world. On the other hand, we have been led to believe, primarily by the field of mainstream economics, but with assists from other disciplines including anthropology, history and political science, that money is a purely rational material substance that comes down to us in its perfected capitalist form from a prehistory of barter and economic reason. These two notions reinforce one another while appearing separated.

Yet, of course, the connections between the two, historically and in the present, make them inseparable. The historically constituted category of art (as a distinct from or a subcategory of the broader swathe of human creative activity) only comes into existence as such when capitalism and its bourgeois ruling class arrive on the scene. As numerous theorists (including Pierre Bourdieu) note, art as we know it and the norms of aesthetic judgment by which it is now identified emerge largely as a means through which the capitalist ruling class, empowered by money (rather than land, title or inherited station) desire “refined” objects, experiences and relationships which signal their “distinction” and cultural capital.[2]

It is plain to see that the history of Western art mirrors the history of money. Art’s “rise” has been devised by those who have the money to commission and collect, the money to sponsor exhibitions and collections, the money to allow their sons to be artists or become the patron of someone else’s son. The world’s great capitals of art are also the capitals of finance: Paris, London, New York, Tokyo, Hong Kong, Shanghai.[3] Indeed, for capitalists today and throughout history, art served numerous roles,  well beyond offering a pretty picture: an alternative asset class for investment portfolios; a vehicle to launder or move money or avoid taxation; a passport into a rarified and stimulating world of international elites; an object of self-congratulatory philanthropy; it even has a psychotropic effect , stimulating the capitalist imagination to new heights of “creative destruction” and “disruptive innovation.”[4]

And yet, for all of this, art can only be “art,” and can only be valued by capitalism’s elites as art (bought, sold, traded, exhibited, celebrated) so long as it vociferously—albeit falsely—insists on its difference and separation from money.

And yet, for all of this, art can only be “art,” and can only be valued by capitalism’s elites as art (bought, sold, traded, exhibited, celebrated) so long as it vociferously—albeit falsely—insists on its difference and separation from money.[5] Hence the bourgeoisie don’t care so much if artists are anti-capitalist malcontents or stormy romantics. All the better![6] This is the very guarantee that the special commodity they produce, art, is legitimate; it’s not money. Art’s performative allergy to money is the invisible signature that, paradoxically, guarantees art its value under capitalism.

Meanwhile, the history of capitalist money while, indeed, a history of bloodshed, colonialism and exploitation, is presented as the natural, neutral and benign evolution of a fundamental and noble competitive human nature.[7] According to both classical and neoclassical economists and historians, contemporary semi-digital fiat currencies inherit the lineage of humanity’s innate and virtuous urge to truck and barter, a presumption that, as David Graeber and others have noted, hardly stands up to scrutiny.[8] But nonetheless this presumption is ideologically useful. It not only suggests that the ludicrous and violent monetary system we have today—one that dominates nearly every aspect of society—is “natural,” normal and right. It also encourages us all to believe in an erroneous, bourgeois, revisionist history and in the inherently (and predominantly) competitive nature of the human animal. Money is a kind of ubiquitous, constant participatory artwork with which we all engage, spreading its less-than-subtle message that we are, each and every one of us at our core, homo economicus, shrewd, competitive, hyper-rational and acquisitive.[9]

And yet money has always been a work of the collective imagination.[10] Even when minted from precious metals, or even when it took the form of useful necessities, like salt, money has always depended on a million acts of the imagination. Under capitalism, money is always an encrypted form or a hologram of the society of which it is a part, of the totality of cooperative energies and labours from which it arises. As the young Marx put it, money is a fetishized  representation of one’s social bonds: we take it for being powerful and natural in its own right, but it is, in fact, a symbol of our power to command the labour of others, a token for access to the resources of our own world, the world that we, ourselves, have helped create.[11] More poetically, Marcel Mauss spoke of money as the “counterfeit of our own dreams,” a kind of externalized proxy for our collective imaginative power to shape and share the earth. In other words, money is perhaps the fundamental measure by which capitalist subjects imagine society and their relationship to it.[12]

Money under capitalism… must present itself as necessary, eternal, natural, rational and inevitable in order to prevent us from recognizing that it is, like all social institutions, something we imagined and are continuously imagining.

All systems of power and domination are desperate to hide the fact that they are works of the collective imagination: the king is a man in a shiny hat whose power is held in place not only by direct violence but also by the widespread, shared belief in his inherent superiority and right to rule. No regime survives long on violence alone, it also depends on presenting itself as right, good, necessary, or, if all else fails, inevitable. No regime can tolerate either the recognition that the legitimacy of power is imaginary or the revolutionary possibilities that this would create for imagining a different kind of life together.[13] Money, under capitalism, is the same: it is both the outward manifestation and the lifeblood of a system of exploitation and oppression. It must present itself as necessary, eternal, natural, rational and inevitable in order to prevent us from recognizing that it is, like all social institutions, something we imagined and are continuously imagining. Hence the ideologues and theocrats of capital spare no effort to insist that money is natural, necessary, inevitable and good. Though no one utters the words, the message is clear: money is money because it is not art.

In my book Art After Money, Money After Art: Creative Strategies Against Financialization I argue that money-art—visual and performance art which engages directly with or integrates money—gains its critical and even radical potential by addressing this tension.[14] These works succeed not by reifying the myth that money and art are diametrically opposed but, rather, by putting on display their profound complicity and tight entanglement, begging the question, if only for a moment: how might our cooperative and imaginative energies might be mobilized and organized differently? This is the work of the radical imagination which is tied to no ideology, in particular. Rather, this work strives to show us that money, art and everything else in our world is, at least in part, a collective fabulation of the imagination, and that the imagination never fails to question, challenge and destroy what it, itself, has created.

[4] Adam, Georgina. Dark Side of the Boom: The Excesses of the Art Market in the 21st Century. Farnham, Surrey: Lund Humphries, 2017.

[9] Wynter, Sylvia, and Katherine McKittrick. “Unparalleled Catastrophe for Our Species? Or, to Give Humanness a Different Future: Conversations.” In Sylvia Wynter: On Being Human as Praxis, edited by Katherine McKittrick, 9–89. Durham NC and London: Duke University Press, 2015.

[10] Haiven, Max. “Money as a Medium of the Imagination: Art and the Currencies of Cooperation.” In Moneylab Reader: An Intervention in Digital Economy, edited by Geert Lovink, Nathaniel Tkacz, and Patricia De Vries, 173–88. Amsterdam: Institute for Network Cultures, 2015. http://networkcultures.org/blog/publication/moneylab-reader-an-intervention-in-digital-economy/.

[12] Graeber, David. Toward an Anthropological Theory of Value: The False Coin of Our Own Dreams. New York: Palgrave, 2001.