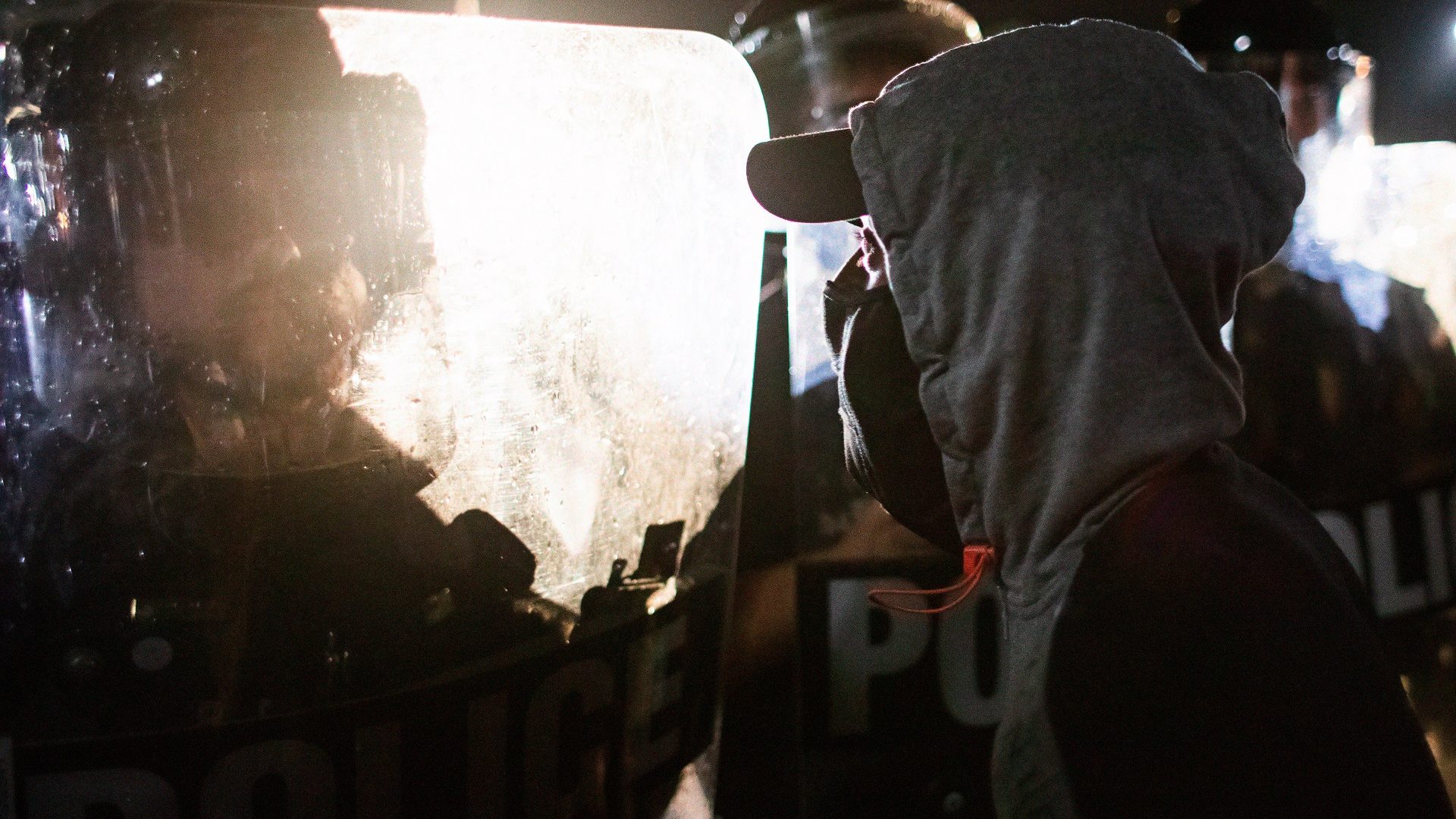 ROAR Magazine has published a short essay I wrote “Rising up against white revenge.”

The current uprisings reveal that America is haunted by the reality of white revenge and manufactured fears of Black revenge. But the tide is turning

Since its inception, the Unites States has been wreaking a deadly and unprovoked revenge on Black people.

It is made all the more horrific because it both disguises and excuses that revenge by casting Black people as pathologically vengeful. The precious horror by which the mainstream media and white pundits have greeted the riots triggered by the police murder of George Floyd in Minneapolis is a quintessential example. His murder was an expression of the kind of needless, warrantless, extrajudicial vengeance that has always been the secret code of the US economy and society, a revenge that never refers to itself as such but is as predictable as a clockwork.

The riots that followed, which are quickly building into a full-scale rebellion, are framed by the institutions of racial capitalism as nihilistic vengeance so as to retroactively justify the structural, systemic and institutional conditions of relentless racist terror that led to them in the first place.

There is a long history of preemptive revenge, one that, as theorists including Sadiya Hartman and Ibram X. Kendi have shown, has been exacted in different forms throughout US history: on slave ships, on plantations, on debt-prisoners and leased convicts after abolition, through lynchings, and every day, for centuries, on the streets of American cities. Sometimes this revenge has been enacted by the police, as in Minneapolis, sometimes by their direct predecessors: the gangs of whites marshaled to hunt people who liberated themselves from slavery, or who sewed terror in Black communities in revenge for the abolition of slavery.

Sometimes this revenge is simply the everyday, grinding humiliation and degradation of poverty that, as Keeanga-Yamahtta Taylor among others has detailed, disproportionately gnaws at Black life, the pervasive shadow of the prison-industrial complex which Angela Davis and Ruth Gilmore Wilson show sabotages so many Black families, and the constant fear that irrational, vindictive violence, perhaps by police, could descend at any moment. The revenge can be blatant, grinning with impunity or, more often, seems, as Eduardo Bonilla-Silva illustrates, to come from everywhere and nowhere all at once, not confined to the ill intent or purposeful action of any single individual.

The systemic vengefulness of racial capitalism has revealed itself in all its blatancy and complexity in the current pandemic where in some jurisdictions Black people die of COVID-19 at rates at least three times that of non-Black people due to a combination of factors that, while not conclusively catalogued, are clear enough: intergenerational exposure to completely unnecessary poverty, poor food, poor housing and environmental racism; lifelong lack of access to preventative medical care; the ghettoization of workers in front-line low-paid service and retail work, often requiring long commutes on underfunded public transit and thus greater exposure to contagion; high incarceration rates that place Black people in institutions where the virus is allowed to run rampant; the list goes on and on.

In America, insult and injury are two sides of a coin of revanchist white supremacy: all the terrors listed above and more are justified in part by the fear cultivated in white people of what they are told, from a million tiny sources, is the impending, inevitable, irrational revenge of Black people, a theme explored by James Baldwin and others since. As Sylvia Wynter has argued, the global racial order was configured around the subhumanization and beastialization of non-white people who were framed as defficient models of full humanity and particularly predisposed to an excess of all-too human tendencies like revenge.

The narrative by which multiple, diverse, once-antagonistic groups of people are conscripted into the absurd and deadly fiction of a singular “white race” (deadly even for white people) is underscored by a tutored fear of racialized revenge. That story, as CLR James wrote of the Haitian Revolution, is constructed precisely to disguise and normalize the endemic revenge a white supremacist system constantly takes on racialized and especially Black people. Justified expressions of rage like the riots in Minneapolis and beyond — though they ultimately and historically hurt relatively few people (unless you consider corporations people) — are presented as evidence, as Khalil Gibran Muhammad has shown, of the monstrous, retributive sub-humanity of Black people, retroactive justification for the policies and policing of endemic and perpetual vengefulness that led to the riots in the first place.

This trope dovetails with the hypocritical and ill-informed fetishization of forgiveness, non-violence and “progress” that, as Cornel West observes, so many white people today project backwards on figures like Dr. Martin Luther King Jr., who their (often literal) fathers once cast as a dangerous “outside agitator” mobilizing a secret Black army of revenge.

But a debt must be paid not only for centuries of subjugation and ruination but for gaslighting and defamation: reparations for slavery, for red-lining, for mass incarceration, for the routine murder of Black people by police. These debts, as William A. Darity Jr. and A. Kirsten Mullen make clear, are all long past due. The courts and laws, which we have been told exist to forestall and prevent society from descending into the hell of revenge, have in so many ways revealed themselves to be institutions to defend, perpetuate and mystify the systemic, structural and institutional forms of racial capitalist vengeance that make so many racialized people, especially Black people, disposable and, indeed, make a gruesome spectacle of that disposability.

It is the sideways awareness of these moral and material arrears, lodged at the heart of white America, that then gives rise, as Carol Anderson shows, to its own revenge politics of the absolute worst. Salivating, the avatar and warlord of white revenge, Donald Trump, quickly responded to the uprising with threats to deploy the American military against its domestic population, revealing that Black people have always been seen by his ilk as disposable interlopers, a foreign threat. He was waiting for this moment, and it comes in an election year.

Trump is a master of echoing a powerful story without ever necessarily speaking it directly. His entire political career has been building to this moment. The narrative is as predictable and asinine as it is vicious, taken straight from the pages of white supremacist propaganda: liberal white people have been too tolerant, too accommodating, too shame-faced towards Black and “minority” demands, have opened the doors of the nation to Black vengeance. “Political correctness,” wokeness and “cancel culture” was, according to this narrative, the psy-ops of a secret race war, intended to weaken white resolve.

Now, Trump insists, only he can save white people from the enemies not only at the gates but within them. If he faces opposition, he will use the military. If not the military, then the white militias, whom he has already cultivated and encouraged. “You have to do retribution,” he instructed a selected group of the nation’s governors on June 1.

Yes, Trump wants a civil war. Or, more accurately, he wishes to resume open hostilities in a civil war that in some ways, as critics since W.E.B. DuBois have noted, never ended, simply continued by other covert means in normalized, institutionalized, banalized, distributed anti-Black revenge.

The riots, then, should come as no surprise. If they are labeled by so many as spasmodic and inchoate forms of political revenge then it is a revenge steeped within and striking back against the normalized, systemic revenge of racial capitalism centuries in the making.

“The white utopia” that Europeans founded in the Americas “was a black inferno,” writes Sylvia Wynter. And so it in so many ways remains. When you live in someone else’s utopia, all you have is revenge. This is not simply because the only tool left to you is violence, though that may be true enough. No matter what you do, no matter how benign or peaceful your protest, the shocked and appalled utopians will fathom it only as revenge.

America, of course, is far from utopia, including for the vast majority of white people who suffer poverty, precarity, alienation and also police abuse, though not nearly at the rate and with the severity as these forms of revenge are exacted on Black people. Yet the thwarted promise of utopia has, since America’s inception, been the lure by which white elites have conscripted poor and working white people. White revenge against racialized, especially Black people, for ruining their promised utopia is the tragic, predictable and sickening norm.

The same racist narrative that frames Black people as pathologically, inherently vengeful contributes something also to the now-widespread sanctimonious belief among liberals that the next step is for Black protesters to calm themselves and develop constructive strategies for change. In reality, what must happen next for any movement forward is mass white ungovernability: rebellion against whiteness, negation of the institutions of white supremacy, treason to white utopianism.

As William C. Anderson argues, we are already seeing this in the streets, where a different future is being rekindled and reinvented in insurgent patterns of solidarity, mutual aid and common life.

Beyond the accusation of revenge, these uprisings resonate with the spirit of a righteous avenging: not merely the retributive turning of the tables, but the overturning of them. They aim towards the horizon where the kind of systemic and structural revenge that has been exacted on Black people becomes impossible by and for anyone.