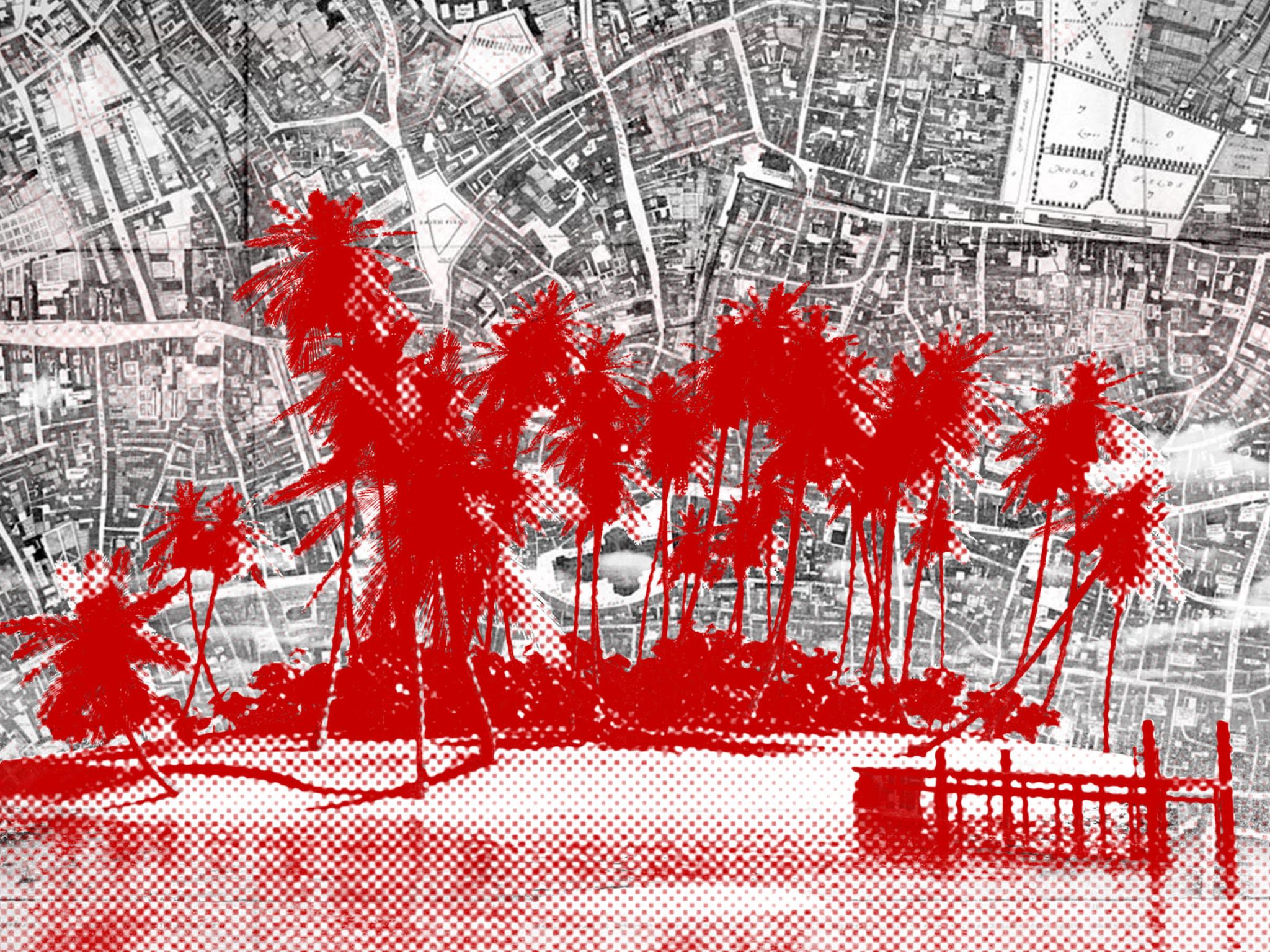 As part of the Counterspecualtions tour of the City of London I organized with Aris Komporozos-Athanasiou I conducted this interview with the French art ensemble RYBN, originally published in a series about the tour by Public Seminar, the online platform of the New School for Social Research in New York.

Psychogeographies of the Financial Imaginary:

Max Haiven: During our the recent Navigating the City walking tour of the City of London in April you were using the Offshore Tour Operator, an open-source device you developed as part of your The Great Offshore project which seeks to make sense of the complex web of physical and virtual offshore spaces where the world’s capitalist elite stash their wealth. Can you explain the device and how it works?

The device works as an audio guide: the user is given audio indications of distance and direction towards the closest offshore companies around them. For instance, when we were on the walk it directed me to the nearby City of London addresses of companies listed in the database. The device works worldwide, and is available both as a DIY open source project that you can customize, or as an experimental app for the Android mobile operating system.

The user is invited to drift in the streets, being guided towards the head office of the many shell companies, ghost banks, foundations, trusts, domiciliation agencies and all the other bizarre entities, agents, and intermediaries that compose the financial offshore network. Due to the nature of this industry, the tour reserves some surprises to the user: the diversity of locations can lead to onshore banks offices, financial institutions, as well as empty buildings, deserted offices, parking lots, wastelands or even churches.

MH: You describe the Tour Operator as a “psychogeographic” technology, in the tradition of the Situationists and, in particular, their technique of dérive or a kind of politicized drifting through public space. Can you talk about the influence of the Situationists here and why you find it an important technique to explore an age of financialization and corporate power?

RYBN: The user of the device enters a paranoid state of mind, changing their interaction with reality. It aims to focus the user’s attention towards details and signs that usually remain meaningless and invisible, but that suddenly begin to make sense. So this apparatus is clearly an attempt to redirect the attention. This mode of investigation has been greatly influenced by sociologist Luc Boltanski’s book Mysteries and Conspiracies: Detective Stories, Spy Novels and the Making of Modern Societies. The apparatus works a bit like the Hoffman Lenses, the pair of sunglasses in the movie They Live by John Carpenter: they shed a new light on the everyday reality we usually just take for granted exposing the banality of this hidden and fantastical economy.

MH: Tell us a little bit about how you did the research for this project, both in terms of combing through the recent leaks about offshore accounts that have been in the news and also in terms of research visits to some of these exotic tax havens.

RYBN: Most of our research has been done in the framework of in situ fieldwork in several tax havens including Dublin, The City of London, Wilmington (Delaware), Zürich, Vaduz (Liechtenstein), Basel, Nassau (Bahamas), Georgetown (Cayman Islands), Toronto, etc. The most important tax havens are actually not exotic at all, but are the central locales of the international onshore banking industry (USA, UK, Switzerland). The most geographically peripheral places in the network play the role of proxies for the central ones, prolonging the historical infrastructures and organization of colonialism. For example, the banking systems in place in the Caribbean are for mostly run by Canadian banks.

For our research trips, we always use the same methodology: gather documentation prior to the travel, visit and explore the local archives to access rare documents, and use the Offshore Tour Operator as a main mediator. From these trips we have brought back documents, maps, photographs, books, images, narratives and objects that we consider essential to understanding the singularity of the construction of a place as a tax haven. All the data are then sorted, classified and organized into our global encyclopedia on the topic of offshore finance. But we do this with a very wide scope of understanding of what counts as important information: we include a lot of local stories that is otherwise undocumented in the official literature, such as local mythologies, ghosts stories, piratology, etc.

MH: the broader Great Offshore project also includes a few other components, in addition to the Tour Operator: There is a research encyclopedia with entries about companies, people, practices and other information about tax havens and offshore capitalism. There is also a set of algorithmic diagrams or flow-charts that are kind of like “how to” guides to tax evasion. Tell us a little about the motivation behind these components, and also the workshops you’ve led.

RYBN: The encyclopedia seeks mainly takes an approach inspired by Perspectivism, the comparative anthropological and philosophical method proposed by Eduardo Viveiros de Castro. It aims to expand our understanding of the tax haven beyond they ways it exhibits economic dimensions in the contemporary world, to the way it is animated by and intersects with constitutive mythologies, tribal laws, rituals and magics, which are hidden by neo-liberal narratives. These include paying attention to things like the Clameur de Haro in Jersey, Voodoo in the Bahamas, the history of witch trials in Liechtenstein and so on.

The Algoffshore is a series of diagrams that try to synthesize the offshoring techniques and strategies. We are trying to break with the general idea of complexity attached to that business. In reality it relies mostly on simple obfuscation techniques and proxy strategies (see the work of the Research Center for Proxy Politics. Our algorithms attempt to exhibit the patterns and forms that constitute the weaponry of the offshore industry — anonymization through trusts, cascades of holdings, “special purpose vehicles”, etc — which are based on what we theorize as an immutable triple logic: (1) the asymmetry between natural and moral statuses, in other words between persons and companies; (2) the global fragmentation of legislations that allow capitalists to choose/combine the most interesting ones for companies; and (3) the structural opacity of the industry as a whole.

MH: What do you think are the prospects for art to confront capitalism today? What sort of advice would you offer to a young artist with these intentions?

RYBN: From all the experiments we have conducted on the structure of our contemporary economy in the past years, whether on algorithmic trading design, market structure, offshore banking, digital labor, or art market, the core element remains to undo the market myths that act as a rationale for the system. Economics is being assimilated by society as a natural law, whereas it is a construction. We have to engage in different logics and break with the financialization, commodification and economization of life in order to move towards ecological and other interests, and we must subordinate the economy and create new modalities of computation. The role of artists here is to propose and imagine these new logics, in the spirit of Cornelius Castoriadis’s notion of the radical imagination.