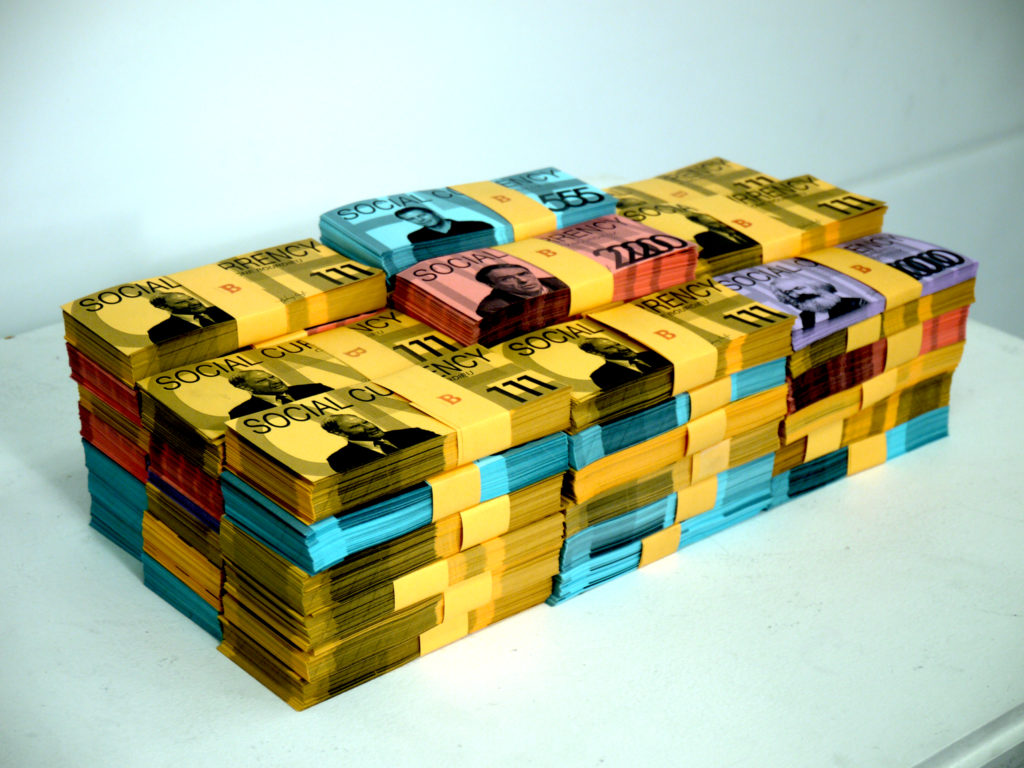 This article was originally published in Canadian Art in September of 2018.

It’s a comforting myth that art and money ought to have nothing in common.

The reality, however, is that ever since there’s been such a thing as “Art”—something distinct from craft, from ornament, from religious iconography—money has been part of the picture. This not-altogether-new observation was one to which my students and I kept returning when I taught a course on art and money at the storied Nova Scotia College of Art and Design (NSCAD). The coursework and research offered a critical examination of the motivations and challenges facing contemporary artists who work with various forms of currency and financial instruments (coins, bills, banknotes, debt, derivatives contracts) as media for creative and critical expression and intervention.

Teaching political economy at NSCAD felt like an important venture for a few reasons. For one, as is by now well-known, the school was going through a rough patch at the time. I was part of the grassroots efforts, led by students, faculty and staff, to fend off a miserly provincial government—under the NDP, it should be noted—that appeared eager to either merge the institution with another, or to close it entirely. In either case, the government saw fit to impose an austerity agenda on the beleaguered but legendary art school. In this context, the mythologies that surround the relationship between art and money infantilize and marginalize artists and arts professionals as hopeless, penniless romantics incapable of minding their purses, while at the same time normalizing neoliberal austerity as stern, rational, necessary paternalism. Ultimately, these two myths mutually reinforce each other: “Art” is art precisely because it is not money; money is money precisely because it is not art.

This leads to the second, perhaps more significant reason it felt so important to teach political economy at an art school, and to expand this research into writing a book about art and money: the times of financial and economic crisis in which we live. While economists assure us that the financial crisis of 2008 is over, that reality is only true for the rich: inequality keeps growing and austerity measures still rule the day. Unfortunately, most people greet this condition with an air of inevitability, as if godlike “markets” and their violent behaviour toward society, especially the poor and precarious, were natural or necessary. In fact, putting faith in neoliberal economics is a choice our society is making—a choice that has a lot to do with the limits on our collective imaginations of what else might be possible.

Instead of asking these questions, however, a whole range of commentators—from remote internet chat rooms to the editorials of establishment media—seek to blame the ongoing crisis on the manipulation of the financial realm or the money supply by nefarious forces that replace real wealth with imaginary proxies. But one of the questions we, as faculty and student researchers, asked was: when has money not been, at least in part, imaginary? It’s not just fiat currencies (tokens like coins or bills authorized for use by the state) that are, after all, useless—gold and silver are too. Money has always been a kind of public conspiracy or a collective hallucination, one that too often reproduces the interests and wealth of the ruling class. The bigger, juicier question is how the powerful are able to manipulate the collective imagination, and how the radical imagination can fight back.

This is the third reason I am so keen to teach and write about these themes: if money has always been, to some extent, a matter of shared belief, of the coordinated imagination of society at large, then maybe artists have a lot more to offer to questions of economics than we ever imagined.

I don’t mean this in the sense of Richard Florida’s notions of the “creative class” and the rise of “creative cities,” which (in spite of his stated intentions) seem to have largely facilitated the financialization of the urban fabric, where artists have been used as the so-called shock troops of gentrification. Indeed, it was already more than 15 years ago that theorist Angela McRobbie warned us that artists were being held up as “pioneers of the new economy”: savvy risk-takers eager to leverage social and cultural capital to pursue competitive independent careers in the “brave new world of work.” In the (successful) fight to save NSCAD from losing its autonomy as a school and an institution, we ended up mobilizing a lot of this rhetoric because we felt it might be the only thing the government, and its corporate allies, would listen to. What we jeopardized was the increasingly heretical truth that there ought to be things in our society—ideas, debates, human experiences—not relentlessly subjugated to the grim calculus of an omnipotent market.

The high umbrage often taken at the “financialization” of art may be slightly misplaced. The idea that art should be immune from money’s influence is a relatively recent one, and one that, ironically enough, is precisely what guarantees art’s value, as the French sociologist Pierre Bourdieu argued almost half a century ago. Art becomes “Art” (and not kitsch or craft) because it is said to stand outside the market—but this is precisely what gives it (potentially) such tremendous economic, market value.

“Art” and money have been, and are, forever entangled, and protestation of this entanglement just makes the embrace tighter. That said, what can’t be denied is the global rise of all sorts of institutions now aimed at transforming artworks into financial assets: new algorithmic indexes that capture and predict the price of contemporary art; art investment funds that allow speculators to pool their capital to buy contemporary works purely to profit from future resale; and hyper-securitized “freeport” luxury warehouses (I recently visited one in Singapore) where these and other investors store their works unseen, beyond any human gaze, potentially for decades or even centuries at a time.

Because we persist in imagining that art stands outside of capitalism, we have faith that it can be critiqued in unique ways. But what if the critical, radical potential of art comes precisely from its entanglement with capitalism? My gambit is that, if we pay close attention to the strategies radical artists use when dealing with money-as-media in this age of financialization, we can learn something important about how the rest of us (non-artists) struggle within, against and beyond a system of financialized global capitalism that otherwise feels like it is saturating and destroying everything in this world.

The real risk in persisting with the romantic myth of art’s fatal allergy to money is that it fetishizes art as a sacred realm profaned by capitalism. In doing so, we end up distracted from the way capitalism is destroying and sapping creativity and imagination from all sorts of other spheres of life, notably the bedrock of the economy itself: the methods by which we cooperate on a finite and troubled planet. Turning artistic impulse, and craft, toward radical economic questions in this sense is long overdue.